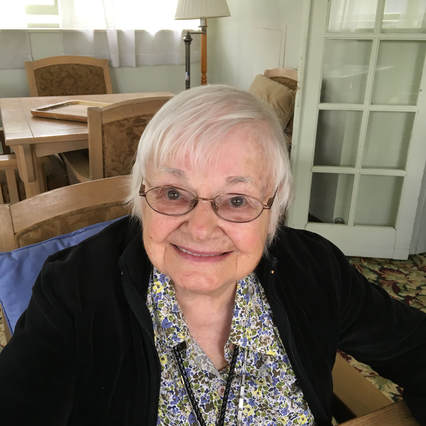 Keywords: Atlantic City, Tupper Lake, New York City, Will Rogers
Interviewed 05/31/2018 by Kayt Gochenaur as part of the Oral History Project at Will Rogers.
​
Charlotte Benderly was born in Atlantic City in October of 1925. She lived in the suburban area outside of Atlantic City, which was a beautiful place at the time. Charlotte remembers the grand old hotels before they were turned into casinos. Her mother died when Charlotte was young. When she was 16, her father remarried, and Charlotte went to Cherry Lawn boarding school in CT, partly because of her stepmother. After graduating she moved to NYC where her father arranged for her to live with family friends. There she worked a variety of jobs, and took classes in shorthand. During this time, she worked for MGM International Department as a secretary, and later moved on to work for the Advertising Department at the NY Times. When she was in her twenties, she moved in with a mentor of hers who was terminally ill, and stayed there until she passed away. She later moved become the Manager of Index Services at the Television Bureau of Advertising. Charlotte enjoyed taking classes after work. Having learnt piano when she was young, she took piano lessons, and enjoyed acting in plays. When she was 47 years old she met her husband Ben Benderly, and they were married three years later. In the 1980s they moved up to Tupper Lake, where they lived until Ben died, and Charlotte moved to Will Rogers. She has been there for three years, and enjoys playing her piano, exercising, and playing scrabble.​