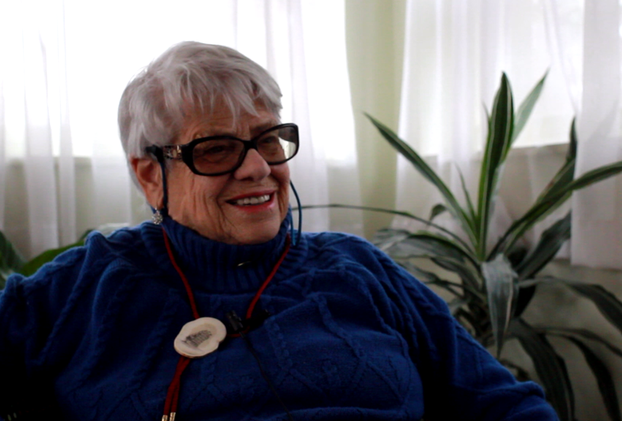 Keywords: Saranac Lake, WWII, 1930-40, 1940-50, Skiing, Tuberculosis
​Interviewed 03/02/2018 by Kayt Gochenaur at Will Rogers
​
Natalie Leduc neé Bombard was born in Saranac Lake in 1930. Her mother was Charlotte Littlejohn Bombard, who was an accomplished seamstress, and her grandfather, James Littlejohn, was one of the first New York State forest rangers. Saranac Lake is in her blood, and it means everything to her. Natalie grew up on River Street at the location of Nona Fina. She attended the River Street Elementary School which is now a part of North Country Community College. She remembers being badly bullied as a girl, and how her good friend Charlie Sporck would walk her to school. When she was still young her grandmother went to Florida and sent her two small alligators, which she used to walk down the street on yarn leashes. She used to play in Pine Ridge Cemetery where she has vivid memory of many Memorial Day celebrations. She remembers writing letters to troops on tissue thin paper that you could mail with a one cent stamp, called victory mail, and bringing coffee and donuts to soldiers coming into Saranac Lake on the train. Her father used to go to the top of Hotel Saranac to identify any aircraft that might be flying overhead, and she used to have to take his dinner down during the blackouts at night. She later moved to Riverside Drive where she lived until she was married. The only time she lived away from Saranac Lake was when she went to Saint Lawrence University. In 1949, while she was at Saint Lawrence, Natalie's father drowned. Natalie had her own children in the fifties, and she says it was as if she was a single mother. She says she is a survivor.

Natalie Bombard was a skier for Paul Smith's College and St. Lawrence University; she won Senior Golden Skis in 1952 and 1956, and the New York Women's Slalom Championship, 1948. She taught skiing at Mt. Pisgah for the Saranac Lake Schools with her mother, Charlotte Bombard. She entered the first Willard Hanmer Guideboat Race in 1963 as the only woman racer; her father, Doug Bombard was also a guideboat racer.
​
She served as Queen of the Saranac Lake Winter Carnival in 1951 and as Grand Marshall in 2005. She is also the president of the Pine Ridge Cemetery Association.