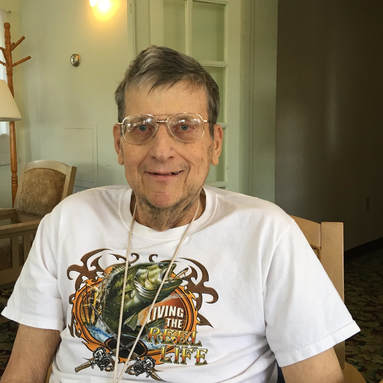 Keywords: Schenectady, NY, Will Rogers, San Francisco,  CA, Fishing.
Interviewed on 08/16/2018 by Kayt Gochenaur as part of the Oral History Project at Will Rogers.

Jim was born on May 3rd 1947 in Schenectady NY. His mother was Lithuanian and his father Scottish. His father was born in Vermont and was in the army during WWII. He met Jim’s mother at work, they were both working for General Electric at the time. She was born in Amsterdam NY. Jim is the oldest of three kids, he has a younger brother and sister. Jim had learning disabilities, went to a special education boarding school where he got his GED. He said it ok, but he was bored mostly. He held a variety of temporary jobs, working at the state education building in Albany, then the IRS, as well has helping his neighbor with his contracting business.  One of Jim’s fondest memories is traveling to California with his sister, and visiting San Francisco. He also loves biking and fishing in the Schenectady area. He stayed in his mother’s house taking care of her until she passed away about a year ago. During this time Jim was diagnosed with cancer, and has since live in two different assisted living facilities before his lifelong friend, Maurice Guerrette suggested Will Rogers. Jim enjoys watching TV and taking trips to the Shamrock Bar and Grill in Gabriels with Maurice and his son.