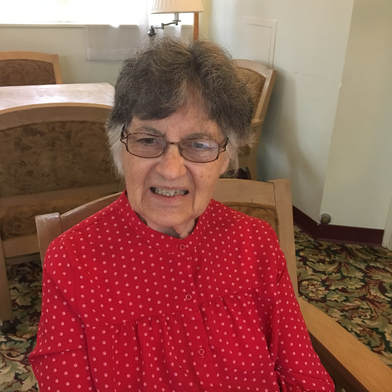 Marcy Dunn was born in NJ in 1941. When she was three, her family moved to Lake Placid where her family ran a gift shop originally built on Main Street (where EMS is now—the original building burned down). Her family later built their own building for the shop at what is now Crestview Plaza. They eventually turned it into two shops, and electric store and an appliance shop. Her paternal grandfather, Semour Dunn, is known for designing the Lake Placid Golf Course. Marcy’s maternal grandfather was Armenian and the story goes that in Armenia, he, and as many of his kinsmen as he could gather together, agreed to fight for Russia, in exchange for being given a piece of Armenian land back. Her grandfather was severely wounded and never saw the land he was promised. As a result, his wife raised their two small children on her own. Marcy remembers her maternal grandmother as being “a real wild character.” She attended Yale drama school, and while raising the two children, she started a store selling family antiques and heirlooms which became the family gift shop. Marcy spent much of her time in high school working at her family’s gift shop. She attended SUNY Buffalo, where she studied education with an emphasis on special ed. She did a lot of volunteer work while at school. After graduating in 1963, she spent two years in the Peace Corps. Peace Corps was only two years old at that point, and it was a much smaller organization then. Afterwards, she moved to NM where she worked at the Santo Domingo Pueblo. This was a wonderful experience for her. In 1970 she moved back to NY, and in 1972 moved back to Lake Placid. She retired around 2013, and moved to Will Rogers in January of 2018, with her brother, Nevton’s, help. Nevton has documented their paternal grandparent’s history through the website http://www.nevtond.com/. Marcy enjoys living at Will Rogers and walking her dog.​