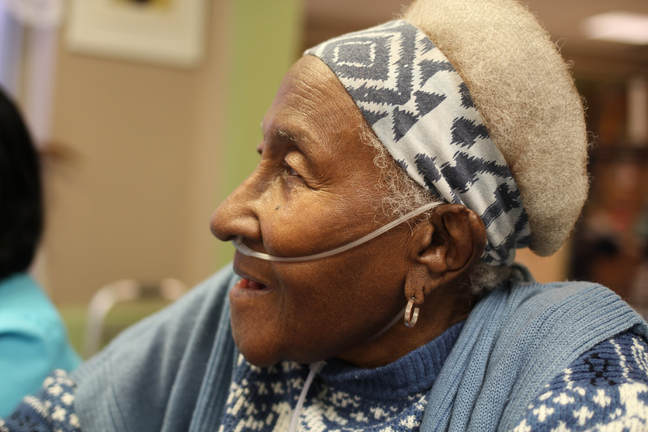 January first marks the start of the new year; for many, that means resolutions, new adventures, and plans for the upcoming year.  For one very lively woman, it is also a special birthday.  Wilhelmina England, known as “Willie” to her friends, will be celebrating her 96th birthday, the latest landmark in a long and incredible life.

A long-time resident of Lake Placid, Willie came to the North Country in 1953, to be treated for tuberculosis at the New York State Hospital at Ray Brook.  Originally from Townsend, Georgia, Willie had moved to New York City in 1941 and it was there that she contracted tuberculosis, a turn of events she said was frightening, as she “didn’t know what was in store.”  After spending some time at Bellevue Hospital, which she describes as being like a nursing home, Willie was told that there was a place for her upstate and that she would stay there until she was cured.  Little did Willie realize she would end up spending the next sixty-four years of her life in the Adirondacks.

Once she had taken “that little train” to Ray Brook, Willie was in what she described as “a beautiful home,” where she was fed heartily, took daily walks, and eventually had surgery on one of her lungs to remove the tuberculosis.  Unable to stay still, Willie did odd jobs for fellow patients and staff, who teased her that she was there to rest.  Yet Willie notes that by helping others, she helped herself to get well.

After being patient at Ray Brook for four years and nine months, Willie was discharged and made the decision to say in the area, eventually settling in Lake Placid, where she has lived ever since.  Willie’s first husband Julian was a fellow patient who, after he was cured, worked at Ray Brook, while she took on jobs in a number of homes in Lake Placid.  Sadly, Julian died of cancer just five years after he and Willie were married.  Willie’s second husband, Miles England, was also a former patient from Ray Brook.  Willie asserted that in both of her marriages, it helped to be in a relationship with someone who understood what it was like to have lived through tuberculosis.

Today, Willie is a charming and lively nonagenarian, living at Elderwood of Uihlein in Lake Placid.  She enjoys a variety of activities, keeping a mini garden of plants in her window, and is a keen conversationalist.  She credits her daily Bible readings as being incredibly important to her now, and especially during her treatment at Ray Brook, saying it got her through her illness.