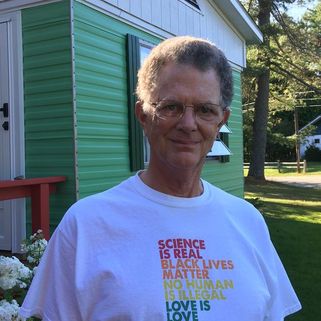 Phil Fitzpatrick has spent the last year or so researching the history of Onchiota for his upcoming book, Onchiota Remembered. Phil, who grew up spending summers in Plattsburgh with his aunts, uncles, and cousins, first came to Onchiota in the 1980s, while vacationing with his son. They were staying on Osgood Pond when Phil first passed through neighboring Onchiota, noticing the signs up at Tormey’s General Store. Phil started looking for a summer home in Onchiota, and in 2010 he and his wife bought small home right in the center of Onchiota. The previous owner left a stack of old postcards and catalogs from the Adirondack-Florida School. Phil, who had done some research into the history of Osgood Pond, was intrigued and started his search into the history of Onchiota. In 2017 he had a collection of Onchiota memorabilia and had started his project in earnest. When describing some of his findings, Phil said “People came [to Onchiota] to be creative.” He describes Onchiota residents as creative, resilient, and hardworking. He spoke about the two great institutions in the Onchiota region being run by women—the Adirondack-Florida School, which was run by Alice Ransom for 40 years after founder Paul Ransom died, and Stony Wold Sanatorium, founded by NY socialite Elizabeth Newcomb. Phil was also struck by how little was known about Onchiota. “I want this place to be remembered. That’s the whole point.” Phil said. He is extremely grateful to the local historical societies, and research centers that have aided his efforts, “…everywhere I’ve turned I’ve found open, supportive, and helpful people.”

​Onchiota Remembered  was published March 15, 2019. It is available for purchase through the author's website here.