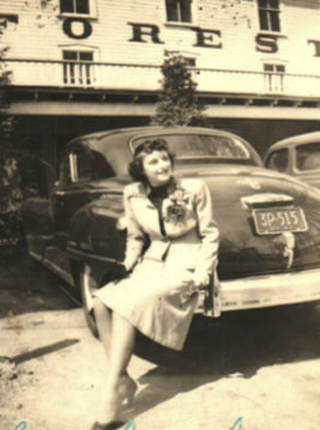 Dorothy Elizabeth Fobare nee Patnode was born on 7/17/1931 in her grandfather’s living room at 298 Broadway, Saranac Lake (currently on Old Lake Colby Rd). Her grandfather was a stonemason, and built the 298 Broadway home around an old farmhouse; this interview includes a visit to this house. She moved around quite during her childhood, living with her grandmother in Lake Clear, where she attended the local two room schoolhouse, and her grandfather in Saranac Lake, where she attended St. Bernard’s elementary school. She also attended a boarding school in Plattsburgh run by St. John’s Church.  She and her family moved to Utica after her younger brother died in an automobile accident. Dorothy moved back to Saranac Lake after high school where she worked at the shoe factory and lived at her Grandfathers’ house. Dorothy married Philip L Rote, a Paul Smiths College student and veteran of the Korean war. They were married about 8 years, during which time she traveled a lot, as Philip was in the military. Dorothy moved back to Saranac Lake after her grandfather passed away. In Saranac Lake she met Chester Fobare, who she married in 1967. Dorothy is a founding member of Historic Saranac Lake, and worked as the treasurer for Historic Saranac Lake She also worked as a bookkeeper for Fobare and Sons Plumbing and Heating, her husband’s business. Dorothy and Chester bought Prescott House with Carol and Richard Yorkey, and they fixed a great deal of damage that had been done to the house. They owned it for 30 years and ran it as a girls’ dormitory for North Country Community College.
​
​Interview audio may be edited or redacted for clarity and/or privacy.  Audio is  part of the Oral History Collection at Historic Saranac Lake.