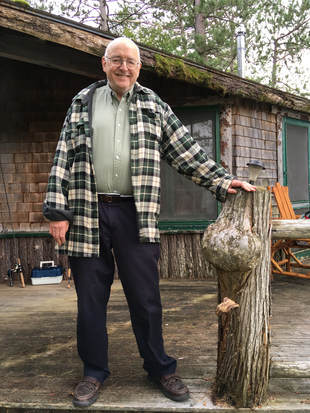 John Robert “Dick” Leonard and his brother Arthur Leonard came to Bloomingdale because of the railroad. They both worked for the Delaware and Hudson Railway. When it was announced the railroad would open a line from Albany to Montreal, cutting through the heart of the Adirondacks, the brothers took the opportunity to visit the area. They rode to Bloomingdale Station where they hired a local guide to show them the area. Around 1886, shortly after the trip, they bought 375 acres on Rainbow Lake. Since then, some of the estate has been divided and some sold, but the family still owns Camp Wa Awa (supposedly meaning “wild place” in Iroquois, though this is unverified) on Rainbow Lake. Arthur owned the land surrounding Lake Kushaqua, and he changed its name from Round Pond to Kushaqua, the Native American word for “beautiful resting-place”. Arthur opened the Kusaqua Lodge in 1893. After a fire destroyed the lodge, he sold the land to Stony Wold Sanatorium. Arthur also owned a saw mill near Roakdale. The mill too was destroyed by fire. Dick and his descendants continued to summer at Camp Wa Awa on Rainbow Lake.  Their property bordered that of the Adirondack-Florida School, and Dick’s son took classes there. Dick and Arthur both settled in Chicago in the early 1900s, where they worked at the Chicago stockyards. Dick continued to spend time at Camp Wa Awa, and in 1921 the camp was wired with electricity.

Dick’s grandson Dan Leonard grew up in Chicago, but every summer, the family would travel to Camp Wa Awa. Dan only remembers one summer spent away from the camp- the summer of 1944, when the wartime gas rationing made travel too difficult. Dan has many stories about his childhood on Rainbow Lake. He was treated by Stony Wold doctors after using a live cartridge for target practice with his BB gun. They used to canoe the Fulton chain of lakes, from Old Forge to Rainbow Lake. As a child, he was startled by the silence of the area; he rarely ever heard birds. The bird population had been decimated by the use of DDT.

Dan studied English Literature at Amherst College, and earned his MBA at the University of Chicago. He married Elizabeth and they continued to spend time at the camp when they could. Dan worked at IBM before starting his own company. He sold the company after four years, and took a job with McKinsey and Co., an international consulting firm. They moved back east for a job with Citibank NY, and later National New Hampshire. After two years at a consulting firm in Boston, Dan started his own consulting firm, and spent twenty years working for himself.

Dan and Elizabeth have three children and many grandchildren. They love spending time with their family at Camp Wa Awa.