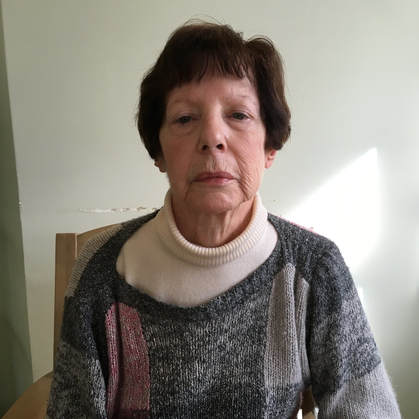 Keywords: Will Rogers, Lockport NY, Somerset NY
​Interviewed on 10/18/2018 by Kayt Gochenaur as part of the Oral History Project at Will Rogers.

Thelma Walker was born Nov 18, 1941 in Lockport, NY. Her father was a professional land surveyor who founded McIntosh and McIntosh, a family firm which is still well known. All of her family still lives in Lockport, where she and her three brothers and younger sister grew up. Thelma’s paternal grandparents migrated from Scotland to Niagara Falls, NY while her maternal grandparents were from Somerset, NY. She remembers her maternal grandmother who was a furrier, making fur coats and stoles. In high school Thelma was athletic, playing tennis, badminton, and competing in track. After graduating she attended community college and graduated as a medical office assistant. Thelma and her first husband had three sons together, Andrew, Daniel, and Christopher, who they raised in Lockport. After she and her husband divorced, Thelma went to Niagara Community College where she studied word processing. Thelma became an executive secretary for a senior vice president at the M&T Bank, where she worked for 23 years. In 1991 Thelma married James Walker, a Vietnam veteran who she met after getting her master’s degree. Thelma enjoyed her job at the bank, and her life in Lockport. She retired in 2003 and moved to Will Rogers to be near her son, after James passed away in 2017. At Will Rogers she enjoys doing cross stitch and reading.​