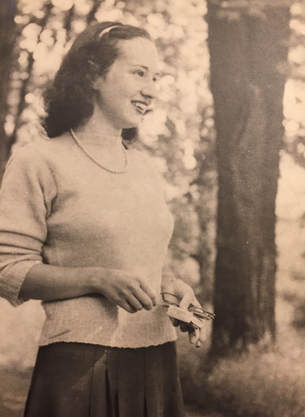 Speaking by phone from her home in Maine, Mrs. Wolinsky happily shared many of her memories: friendships, cousining, and life beyond the san.  She met Emanuel in 1945 when they were both patients.

Marjorie Wolinsky (nee Claster) was 20 years old when she left New York City in 1939 to travel to Saranac Lake.  Marjorie was headed for the Trudeau Sanatorium, where she would remain a patient for six years.  Those six years would be mark a remarkable period of her life, during which she would make life-long friends and fall in love.

In Marjorie’s eyes, Trudeau was at its peak at the time: bustling with patients and a top-notch staff before it closed down in 1956.

Marjorie recalls Childs Infirmary, a one-story building which was, to her, old even then. The building was designed in a semi-circle “so that all the beds that were outside faced into the mountains, the most gorgeous view you’ve ever seen.”  Luddington she described as being modern, where patients were pushed out to the porches.  The winters at Luddington, she said, “were just grim,” due to the extreme cold.  Marjorie and the other patients wore heavy coats, earmuffs, hats, and electric blankets.  The porches had some screening, but the snow came through the screen, so that the patients would wake up covered with a layer of snow.

Marjorie noted that there was “a lot of cousining” and that she knew several people who married other patients.  Some eventually moved away while others stayed in Saranac Lake.  It was, she said, “just a wonderful gathering of people” and that she “made some of the best friends” of her life while at Trudeau.

Marjorie’s mother visited her at Trudeau once, but never again.  “She loathed it,” according to M.

Marjorie recalls that the “whole time I was there, there was only one death,” that of a Japanese girl who was already very unwell when she arrived at the san.  The sense of camaraderie was apparent with almost all of the patients.  Marjorie noted that when anyone “land[ed] back in bed” other patients would come by to visit and bring good cheer.

Patients were grouped in cottages and if they were “up” patients, gathered for meals in the dining room.  Before the war, the dining room featured waiters and waitresses.  During the war, dining changed to “cafeteria style” meals and patients even helped with the dishes.

At that time, as Marjorie notes, there were “no drugs to help you.” When penicillin and other drugs did come along, it was “earth-shaking” for Marjorie, her husband, and countless other patients.

Marjorie had had a pneumothorax: her lung was collapsed and she lived that way for three and a half years.  Like so many other treatments of the time, it helped Marjorie’s tuberculosis but also created other medical problems.  Other patients had a nerve cut near their diaphragm, while others had thoracoplasty, which was sometimes a three-phase operation.  “It was butchery, but it saved many a life.”

Before moving to Cleveland, both Dr. and Mrs. Wolinsky were active in local activities, including the Saranac Lake Concert Society, which brought world-class musicians to the area, such as violinist Joseph Szigeti and the Amadeus Quartet, which was founded by musicians who met in a World War II internment camp.​